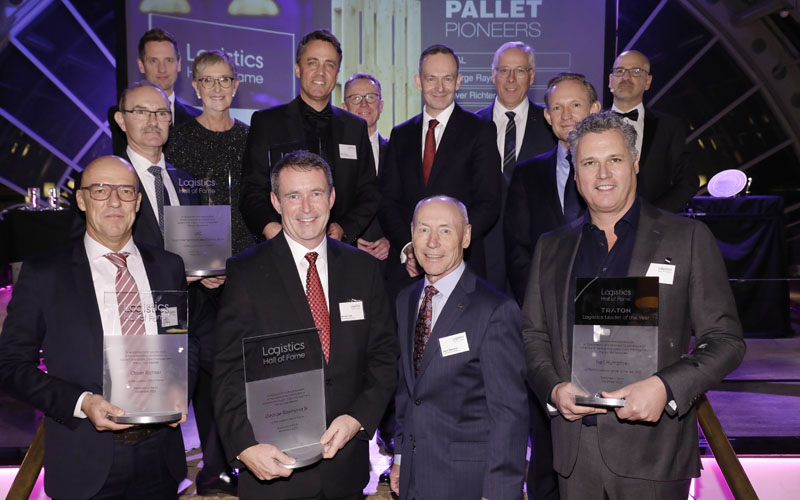 Gala reception of the Logistics Hall of Fame 2022

Warm applause in the Restaurant Wintergarten in the traditional KaDeWe luxury department store: Last Tuesday evening in Berlin, the pioneers of the pallet's global triumph were inducted into the Logistics Hall of Fame. Because the Erich Klausener Hall in the Ministry of Digital and Transport is currently being renovated, the 2022 gala reception took place on the top floor of the famous German department store. Almost 200 guests from business, science and politics honored the merits of the pallet pioneers. A place among the world's most famous logisticians is awarded this year not only to two personalities, but for the first time the jury also awarded two associations.

"Today, we can hardly imagine an economy without pallets. Anyone who wants to compress goods into larger units and store them in a space-saving way, anyone who values efficient, fast and safe transport, cannot do without the pallet. This is the only way to ensure optimum and sustainable utilization of our infrastructure. The pallet is the foundation of logistics. And logistics is the backbone of our economy", emphasized Dr. Volker Wissing, German Federal Minister for Digital and Transport, in his laudation. The politician has been patron of the Logistics Hall of Fame since April 2022.

Posthumously, George Raymond Sr (1890-1967) was inducted into the Logistics Hall of Fame. The US American founded the intralogistics specialist The Raymond Corporation and invented the double wooden pallet, patented in 1939. Steve Raymond, retired President of Raymond Handling Concepts and grandson of George Raymond Sr, attended the event in honor of his grandfather and Michael Field, president and CEO of The Raymond Corporation, accepted the trophy from the Federal Minister of Transport.

Also occupying a place in the Hall of Fame is Oliver Richter (1920-2014). As manager of Brambles in the 1960s, the Australian saw the potential of a closed rental pool for load carriers. He also helped today's CHEP system achieve great success internationally as a closed rental pool. The certificate was presented to CHEP's Senior Vice President & Country General Manager, Central & Eastern Europe, Volker Sdunzig.

In logistics, the UIC (Union Internationale des Chemins de Fer) is considered the mother of the Euro pallet, which was developed in 1961 in a working group of European railroads. The international railroad association pushed for the standardization of pallets. At the same time, it obliged all signatories to a contract to comply with the standards, to produce as well as repair the Euro pallet. Thomas Metlich, Chairman of the UIC Working Group "Palletizing Issues", received the award on behalf of the association.

On behalf of the European Pallet Association e. V. (EPAL), its president Dirk Hoferer received the glass and steel certificate. In the 1970s, what is now the National Committee of the association took over the dissemination and quality assurance of the Euro pallet to a large extent. EPAL, founded in 1991, took the pool idea further and ensured the quality of the Euro pallet.

The decision on the pallet pioneers' entry into the Logistics Hall of Fame was made in summer by the 70-member jury, which includes personalities from business, science, politics and media in 13 nations.

The gala reception will also be long remembered by Neil Humphrey, President Business Unit Supply Chain at logistics service provider HAVI. The Briton was honored as "TRATON Logistics Leader of the Year 2022." In his laudatory speech, Friedrich Baumann, board member for Sales and Customer Solutions at TRATON's MAN Truck & Bus brand and representative of the award sponsor, praised Humphrey as a "pioneer of sustainable supply chain practices and digitalization, dedicated networker and tireless driver of digitalization initiatives as well as pilot projects with new technologies."

Humphrey went from Unilever to contract logistics provider HAVI in 2017. He has headed the supply chain business unit since 2018. Under his leadership, the service provider joined the Science Based Targets Initiative (SBTi) in 2019  ̶  at the time as one of the first ten logistics service providers worldwide. HAVI committed to reducing carbon emissions by 40 percent per ton delivered by 2030. With the program running successfully and science setting new global benchmarks in climate protection, HAVI is currently looking at increasing this target.

HAVI also partnered with a commercial vehicle manufacturer to convert 70 percent of its European delivery fleet from diesel to alternative fuels. By 2021, the target had been reached. In addition to supporting projects with alternative fuels, environmentally friendly logistics centers or e-trucks, the 59-year-old manager and his team also got a pilot project with hybrid trucks up and running in Stockholm. The aim is to introduce a climate-neutral hybrid truck solution throughout Europe. The vehicles use their batteries to operate in the city, but use recycled frying oil as fuel outside the city. The used oil is collected during deliveries to restaurants, processed in a special facility and then filled into the tanks of the HAVI trucks.

During the gala reception, the organization announced a new international philanthropy award. The Lynn C. Fritz Medal for Excellence in Humanitarian Logistics will be awarded annually to humanitarian organizations and their partners for outstanding logistics projects starting in 2023. The Fritz Institute in San Francisco (USA) is the initiator and sponsor of the medal. The award is named after the Institute's founder and CEO Lynn C. Fritz, who was inducted into the Logistics Hall of Fame in 2021 as the "advocate of logistics for humanitarian organizations." "The award is intended to highlight the importance of excellence in logistics within the sector and to promote innovative approaches to strengthening disaster response," the entrepreneur emphasized during the gala reception. Starting in March 2023, humanitarian organizations with successfully completed projects can apply for the award on the Logistics Hall of Fame website.

The TRATON Logistics Leader of the Year Award honors pacesetters and future leaders in logistics. Entrepreneurs and managers from the transport and logistics sector are honored who have been particularly successful in promoting their companies or who have set a trend-setting impulse. The focus is on topicality and the benefits for the company as well as innovative strength, sustainability and entrepreneurial change. The award is presented by the Logistics Hall of Fame and donated by TRATON SE.

In contrast, the decisive factor for acceptance as a member of the Logistics Hall of Fame is that an achievement is not only beneficial to an individual company, but has significantly and permanently advanced logistics beyond the boundaries of one's own organization or has become an industry standard. So far, 41 logisticians have made it into the international hall of fame.