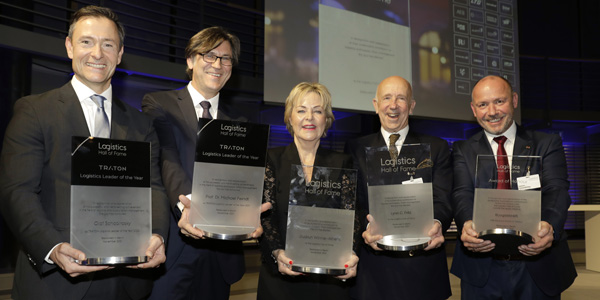 Gala reception of the Logistics Hall of Fame 2021 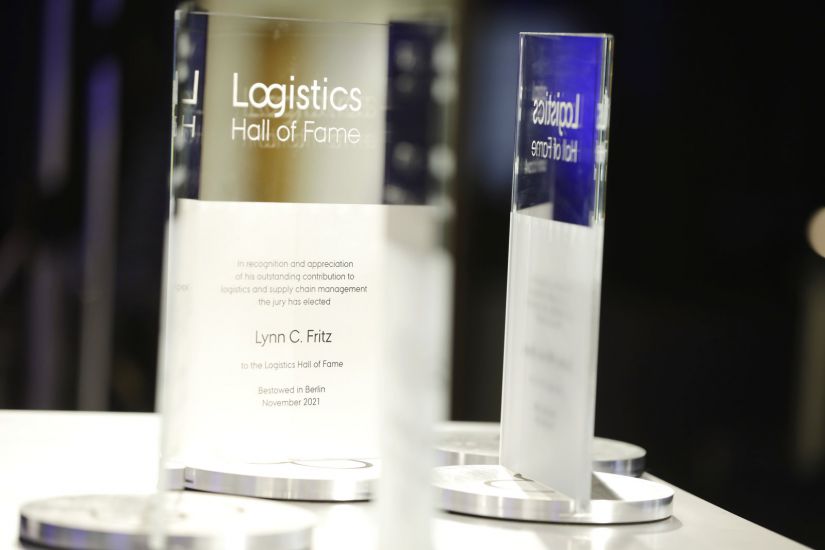 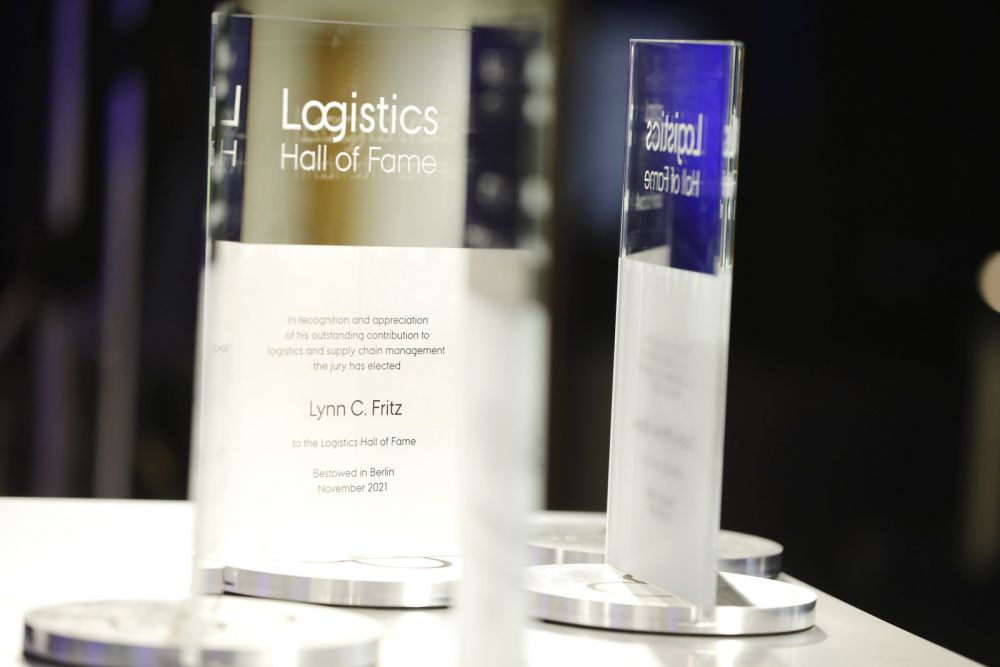 "Lynn C. Fritz can claim to have transferred and adapted the strategies of industrial logistics to aid organizations in the mid-1990s," emphasized Steffen Bilger, Parliamentary State Secretary at the Federal Ministry of Transport, in his laudatory speech. To actively help, the Californian founded the Fritz Institute after selling his company Fritz Companies Inc. to UPS in 2001. The nonprofit organization named after him works in partnership with governments, NGOs and companies around the world to professionalize disaster relief. In addition, the 79-year-old launched the first association for humanitarian aid workers in the U.S. and had software programmed that relief organizations can use free of charge. "Ultimately, countless people in disaster areas owe their lives indirectly to Lynn C. Fritz because relief supplies arrive more efficiently and quickly today than in the past," Bilger said. Fritz accepted the aluminum and glass membership certificate in the Allianz Forum.

Gudrun Winner-Athens, who had already been elected to the Logistics Hall of Fame the previous year, was also presented with the certificate. Winner-Athens, who lives in Iserlohn, is regarded in Europe as a pioneer of combined road-rail transport. "The entrepreneur has contributed significantly to the growth in importance as well as to the internationalization of combined transport by rail and is a recognized expert in road-rail combination," emphasized DSLV Honorary President Dr. Michael Kubenz in his laudation. He also paid tribute to her commitment on the Board of Directors of Kombiverkehr - Deutsche Gesellschaft für kombinierten Güterverkehr mbH & Co. KG for many years. Winner-Athens was the first woman to hold the chairmanship from 2002 to 2020. "Continuity is her credo, she has staying power and can wait for the most opportune moment, even if it takes a little longer," Kubenz said.

Managers Olaf Schabirosky (CEO of Hermes Germany) and Prof. Dr. Michael Feindt (co-founder of Blue Yonder) will also remember the evening in Berlin for a long time: they were honoured as "TRATON Logistics Leader of the Year" for 2020 and 2021, respectively. In his laudation, Christian Levin, CEO of TRATON Group and representative of the award sponsor, praised Schabirosky as a "modernizer who has been instrumental in driving the expansion of the CEP company´s infrastructure and digitalization, even during the corona pandemic." Not least because of the 53-year-old manager's intelligent change management and the corporate culture he exemplifies, the Hermes Group was according to Levin able to increase its revenue by 9.0 percent to 3.5 billion euros in fiscal year 2019/2020.

Schabirosky was in the media in 2020, Michael Feindt this year. A few months ago, the Japanese electronics company Panasonic invested a total of more than 8.5 billion U.S. dollars in the software company Blue Yonder, which Feindt co-founded. The 63-year-old physicist took a leave of absence as a professor at the University of Karlsruhe to transfer his knowledge to the business world as an expert in data-driven software development and artificial intelligence. Algorithms from Blue Yonder significantly improve predictions in terms of pricing and replenishment and have opened up considerable rationalization potential, particularly in the retail sector.

During the gala reception, the #LogistikHilft initiative was presented with the jury's Award of Honour. This award, with which the jury can recognize outstanding initiatives, was presented for the first time in the history of the Logistics Hall of Fame. With this award, the jury members recognized the volunteer commitment of the campaign in the context of the corona pandemic. "#LogistikHilft has set an example for solidarity with logistics and has provided proof that fast and unbureaucratic help is possible at any time. Ultimately, the jury was convinced by the fact that the funds raised directly benefit those affected and that all those involved work on a voluntary basis," emphasized jury chairwoman Anita Würmser.

#LogistikHilft is an initiative of politics and business. The Bundesverband Güterkraftverkehr Logistik und Entsorgung (BGL), together with the non-profit association DocStop / SaniStop, has taken on the task of coordination and operational control. They were supported by KRAVAG, which, among other things, mapped #LogistikHilft locations in the KRAVAG Truck Parking App, and LUIS Technology GmbH from Hamburg, which is responsible for the #LogistikHilft homepage and webshops in cooperation with the Fraunhofer IML. For example, the initiative had organised that truck drivers find clean toilets as well as possibilities to shower along motorways during the corona pandemic. Sanitary containers were set up for this purpose from April 2020. Joachim Fehrenkötter, Chairman of DocStop, received the award on behalf of the initiative.

The Logistics Hall of Fame honours personalities who have rendered outstanding services to the further development of logistics and supply chain management. It is under the patronage of the Federal Minister of Transport and Digital Infrastructure and is supported by numerous associations and companies. The "TRATON Logistics Leader of the Year" award recognizes entrepreneurs and managers who have been particularly successful in promoting their companies or who have set a trend-setting impulse. The focus is on topicality and the benefit for the company. On the other hand, the decisive factor for inclusion as a member of the Logistics Hall of Fame is that an achievement is not only beneficial to an individual company, but has significantly and permanently advanced logistics beyond the boundaries of one's own organization or has become an industry standard. So far, 37 logistics companies have made it into the international Hall of Fame.

Impressions from the Gala Evening 2022

Gala reception of the Logistics Hall of Fame 2022